“Originally released in 1993 on Wigwam (1994 on Ninja Tune), The Final Corporation Colonization Of The Unconscious is an early quasi-ambient excursion from Burnt Friedman. In amongst the more surreal, soundscape-based works and laidback downbeat moments you’ll find hints towards the kind of dub-oriented rhythms Friedman went on to explore at greater length later on in life. There are one or two big surprises in store: the thumping, nineties drum & bass of ‘Hoax What Did You Got’ is all a bit ravey for a man you’d chiefly associate with moody, smokey jazz aesthetics, but equally weird, the album is all the better for having bizarre concrete interludes such as ‘Marathon/Texas 4:33′ in amongst its schizoid tracklisting.”(boomkat)

“An underrecognized classic of downtempo/experimental ambient dub-hop, with melodic depth and accomplished production often lacking in more popular benefactors of the sound. Drome’s sound here is quite a distance in refinement from the earlier Toxiktrakks material, but as with earlier releases, Colonization is ripe with tweaked, perverse arrangements, combining musique concrète, dub reggae, hip-hop, jazz, house, and even hardcore breakbeat techno in ways that somehow make perfect sense.” (allmusic)

1 Age Of Affordable Retina
2 Hinterland, Kasseler Kessel
3 Squirrel
4 Down At Heels
5 Hoax! What Did You Got ?
6 Steel Lung, Buy One
7 Marathon/Texas 4:33
8 Nuzzling
9 Wonderland 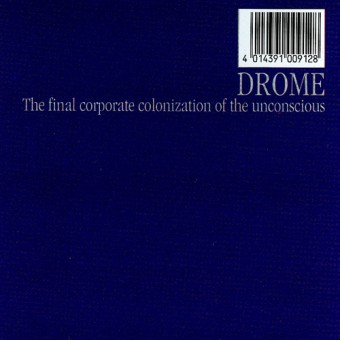