filmed in Berlin, January 1st, 2019 – after the fireworks 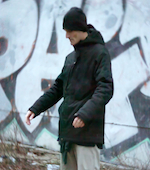 On January 1st 2019, B.Friedman decided to shot video footage in the local neighborhood. With the helping hand of J.Plachy (camera and co-producer) they captured the dire atmosphere of Berlin’s post New Year’s Eve firework celebrations. Burnt Friedman performs a set of ‘omission’ – gestures accompanied by some essential lines extracted from The Upanishads. With regards to grasping the concept of a ‘self’ and ‘consciousness’ in general, Eastern ‘philosophy’ has been and is extremely elaborate, even more radical than the Western version. In fact, the Western grasp on such issues has often been derived from those of the East. Are the few extracted lines (‘the supreme self is neither born nor dies, etc.’) still actual and accurate? Do those lines stand the test of time? When confronted with the Profane of Berlin’s most neglected areas, juxtaposed by the pondering of a detached, self-liberated, Western individual and an audio track of ‘grittily vicious coherence’ (boomkat.com review) can a ‘supreme self’ still be detected ? A question of faith.